3 Places for Men... to Get Suits and Ties in Northeast Ohio 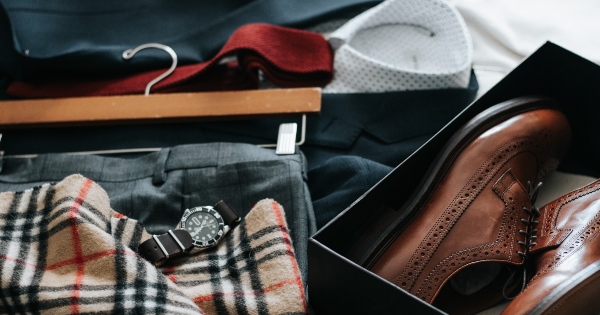 What is a man without a suit? As far as I can tell, it’s a casual man. Personally, I think those men can be a wee bit too casual for comfort. At least, when it comes to important events, men should wear something formal or, at a minimum, semi-formal.

You can’t show up in a flamingo onesie. Just, no; life should be fun, stylish, not crazy. Weddings, and everything around them, should be an entertaining affair with each suit properly – ahem – suited to the event of the hour.

In Northeast Ohio, there are plenty of men’s suits distributors and tailored suit providers. In future articles, as a writer for Northeast Ohio Wedding Magazine, I’ll be working to bring a men’s perspective or information important for men to the forefront: “Hi, I’m Scott Jacobsen, Man-in-Residence.”

The stores here don’t represent a ranking, nor do they represent a comprehensive list. And, I am saying this as a Canadian, as a young man foreigner, who happens to speak (mostly) the same English as you.

If you want to rent a suit in Canada, you’re probably looking at about 150CAD (115USD). Same process as in the U.S. You go to a store with rentals and pay the price to get an appropriate rental. You simply need to balance the consideration of the price of the suit against the price of the rental.

A purchase of a suit might cost double a rental to start off decent. It rises after that point when you’re looking at the best quality and style. Because there are so many great distributors and providers of men’s apparel relevant for the big day.

To start, here are three, those with a certain pizazz catering to different tastes for men.The three are: Balani Cleveland, Davide Cotugno Executive Tailors, and the Whatknot Bow Tie Company. Balani Cleveland is one of the stores devoted to everything. Davide Cotugno Executive Tailors is focused on jackets and lightweight fabrics or better known for them. Whatknot Bow Tie, of course, is known for bow ties.

Balani Cleveland is an exciting place to shop for suits and tuxedos. It’s one among a large number of locations for Balani. Also, as an entire company, it has won a large number of awards for its branding and quality of tailoring. Awards aren’t everything, but awards can help guide choice. It shows a reputation.

It has been named “One of the Top Six Tailors in the World” by J.W. Marriot Magazine ; “Top Custom Shirt Maker” by Men’s Magazine ; and, “Best High-End Tailor” by Chicago Magazine. It’s both a competitive brand and a respected, award-winning one, too.

For the men out there, one thing definitely unwanted for a wedding day is either an untailored suit or a lack of focus on quality. Imagine a baggy suit, how will this look on the wedding day? How about an ill-begotten tie poorly suited to the style of the suit itself?

What about a color design best fit for a funeral, or a keg afterparty from a work conference? People and cultures have standards for events and occasions. You should too. Your wedding or a buddies wedding should be no different.  Balani Cleveland can help you.

Its success largely derives from two generations of experience and development. They have a legacy spanning back to 1953. It started in the European fashion mills and grew to several cities, including Cleveland, Ohio.

If you’re looking for some of the best in the world, locally situated in Ohio, Balani Cleveland is the place. They have suits, tuxedos, jackets, shirts, slacks, outerwear, even complete custom wedding suits. Balani Cleveland is a comprehensive prime time for men’s style and grooming.

Davide Cotugno Executive Tailors is a longstanding business rooted in Italian and British culture of the famous Davide Cotugno. He learned tailoring from his father, Giuseppe Cotugno. It’s a family affair.

So, men, you may be a heavier set or more lean. No one’s body is perfectly proportional, which is where the point of a custom suit regardless, a custom, tailored suit can do wonders for you. It can be a source of both pride and positive self-presentation. How do you want to look – to come off in public – in social settings?

A good suit, well-fitted, can do as a good as freshly cut hair styled in the local fashion for men. For Ohio, it’s right in line with the mainstream of America. Men, on big days, including weddings, should wear suits. Why not make it tailored, purchased locally, and suitable for Ohio?

Davide Cotugno Executive Tailors represent an admixture of long experience in Italian and British culture-based and steeped in America. Its locale in Ohio will be sure to help with the requisite needs for the big day.

Bow ties aren’t the event and don’t make a wedding as much as a suit or a tux does, but bow ties are a nice accessory if you prefer those over regular ties. However, for other men at the event, these can be appropriate. There are expectations, socially and culturally, as to what men can and cannot wear.

Unless, your family and bride are extraordinarily lenient and the occasion becomes one of the highly customized weddings, e.g., Star Wars weddings, Star Trek weddings, and the like. Then you can customize and deviate from norms as much as you’re permitted.

However, in most circumstances, you’re working within well-defined limits. The groom, typically, will not wear a bow tie. Whereas, the groomsmen can wear a tie. Although, if you look around, there are some bow tie based weddings.

Besides, even if you’re not explicitly going to buy something for a personal wedding, (or a funeral, there’s nothing wrong with having a bow tie or a set of them. In that, you can use bow ties for a wide variety of occasions.

It started in Cleveland, Ohio in December 2012 under Mark A. Mathews. Matthews couldn’t find any bow ties appealing to him. Eventually, he had an idea. He decided to simply make bow ties by hand. Ones that he would find appealing. He bought a sewing machine on Craigslist and learned how to sew.

Over time, he began to develop the business and purchased a brick and mortar store in downtown Cleveland. This place stands out for its unique and nearly sole focus on bow ties. It contrasts with the others.

Whether comprehensive tailored suits or bow ties for individual uses, weddings would be a different affair without these companies. If you’re mindful of a man’s needs or your own as a man, you’ll need some accessories. No need to look far. Ohio has the right spots.

Photo by David Lezcano on Unsplash